A recent Executive Order issued by Governor Andrew Cuomo, together with recent amendments to the insurance and banking regulations (the “regulations”) issued by the New York State Department of Financial Services (“Department”), extend grace periods and give you other rights under your life insurance policy or annuity contract if you can demonstrate financial hardship as a result of the novel coronavirus (“COVID‑19”) pandemic.

These grace periods and rights are currently in effect but are temporary, though they may be extended further.  Please check the Department’s website at  https://www.dfs.ny.gov/consumers/coronavirus for updates.

A copy of the Executive Order and regulations can be found at https://www.governor.ny.gov/news/no-20213-continuing-temporary-suspension-and-modification-laws-relating-disaster-emergency    and https://www.dfs.ny.gov/system/files/documents/2020/03/re_consolidated_amend_pt_405_27a_27c_new_216_text.pdf, respectively.

Catching up on Overdue Insurance Payments

Catching up on Overdue Payments to Premium Finance Agencies

How to Demonstrate Financial Hardship

If you have any questions regarding your rights under the Executive Order or regulations, please contact your insurer, broker, or premium finance agency.

This historic and sweeping legislation was created to help keep workers paid and employed, allows businesses to remain operational and makes necessary health care system enhancements to stabilize the economy. We want to make sure you are aware of certain provisions designed to help you.

The Setting Every Community Up for Retirement Enhancement (SECURE) Act 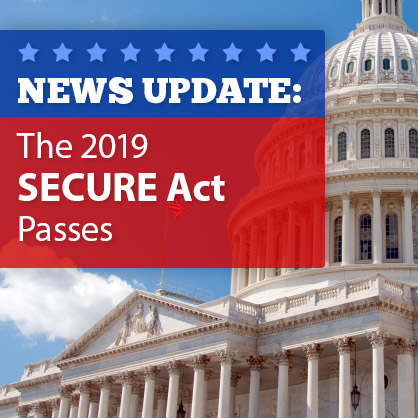 Barely half (51%) of the workforce is covered by a retirement savings plan through their employer, according to the United States Bureau of Labor Statistics. The December's passage of the SECURE Act, the biggest retirement-oriented legislation to pass in over a decade, is meant to address this issue, among other things.

Here are the top 10 Key Provisions:

The SECURE Act allows unrelated small employers to band together in “open” 401(k) multiple-employer plans (MEPs; also referred to as pooled employer plans (PEPs)). This reduces the costs and administrative duties that each employer would otherwise bear alone. The Act also eliminates the “one-bad-apple” rule under which a violation by one employer participating in a MEP can trigger severe penalties for the compliant employers in the MEP.

The SECURE Act very generally permits employers to add a safe harbor feature to their existing 401(k) plans during the year; such additions are even permitted very late in the year and after the endof the year if the employer contributes at least 4 percent of employees’ pay instead of the regular 3 percent. It also allows employers to adopt a plan for a taxable year as long as the plan is adopted by the due date for the employer’s tax return for that year (including extensions).

The SECURE Act increases the business tax credit for plan startup costs to make setting up retirement plans more affordable for small businesses. The tax credit will increase from the current cap of $500 to up to $5,000 in certain circumstances. It also encourages small-business owners to adopt automatic enrollment by providing a further $500 tax credit for three years for plans that add auto-enrollment.

The prohibition on making deductible contributions to a traditional IRA after age 70½ is repealed.

The SECURE Act requires employers to include long-term part-time workers as participants in defined-contribution plans except in the case of collectively bargained plans. Eligible employees will have completed at least 500 hours of service each year for three consecutive years, and are age 21 or older. However, these participants can be excluded from employer contributions, nondiscrimination and top-heavy requirements. Previously, part-time workers could be excluded if they haven’t worked 1,000 hours in a 12-month eligibility period.

6. Plan Withdrawals for Birth or Adoption

The SECURE Act allows an exception to the 10 percent penalty for birth or adoption. New parents can now withdraw up to $5,000 from a retirement account within a year of a child’s birth or adoption without the 10 percent penalty those younger than 591/2 would normally owe. The distribution, which is still subject to tax, can be repaid to a retirement account.

The SECURE Act increases the age triggering the required beginning date for plans and IRAs to 72.

The SECURE Act offers a consolidated Form 5500 for certain defined-contribution plans with a common plan administrator to reduce administrative costs, but also increases penalties for failure to file retirement plan returns, such as Forms 5500, required notifications of registration changes and required withholding notices.

The SECURE Act creates a safe harbor that employers can use when choosing an annuity provider to provide annuity distributions under a defined-contribution plan.

The SECURE Act imposes a 10-year distribution limit for most non-spouse beneficiaries to spend down inherited IRAs and defined-contribution plans. Before passage of the Act, withdrawals from inherited accounts could be stretched over the life of beneficiaries to mitigate taxes.